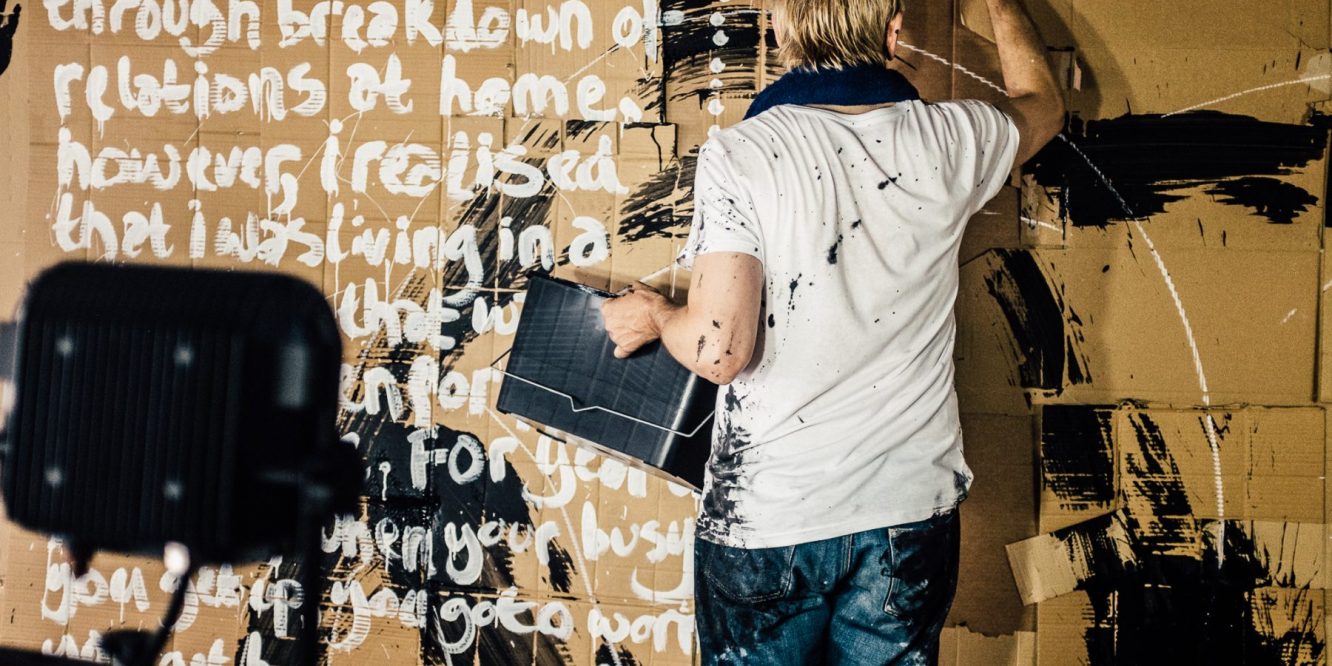 tube uk was extremely proud to be involved in supplying audio for Manchester Street Poem, an innovative installation piece created by Karl Hyde and Rick Smith from well-known electronic duo Underworld, as part of the 2017 Manchester International Festival (MIF17).

Staged in a disused shop in the vibey Northern Quarter, the artwork shone a spotlight on the stories of individuals who have found themselves homeless in the city. It was an intricate visual and sonic medley involving live performance art as Karl Hyde painted narrative excerpts from around 35 interviews he conducted with people from the homeless community – telling their stories – on the card-boarded walls of the shop.

All the cardboard utilized for this installation was recycled from other shows in the Festival!

The dynamic work-in-progress was supported by a soundtrack combining the spoken word interviews that Karl had conducted, backed by an audioscape created from sound fragments and noises recorded alongside the interviews … from in and around the city.

Hearing and seeing the stories simultaneously brought a real depth and 3D resonance to the experience as viewers walked around the otherwise empty shop-gallery.

The piece brought the personalities of those at the heart of the work alive, allowed their dignity and individuality to shine through in vocalising their wide range of experiences to be laid bare.

Clarity and intelligibility throughout the approximately 50 metre long 12 metre wide space were vital requirements for the sound for which tube specified 12 x d&b E6 speakers, also picked for their compact size so they were unobtrusive.

These were running with three d&b E12 subs which accentuated the bassey underbelly of the soundscape.

The E6s were positioned on a shelf which conveniently ran around the perimeter walls of the shop and were split into three different zones, allowing sound to be balanced throughout the space.

Laid out and distributed as sets of left and right pairs prompted a spatial movement in the sound field, adding a further layer of texture to the live experience of those moving around the gallery.

The major challenge was a practical one – keeping the speakers as protected from the painting as possible!!!