Audio specialist tube uk followed their sense of adventure and love for the unusual and challenging site-specific installations to Cammell Laird Shipyard in Birkenhead, Merseyside, where working for live event production company Mills Media Creative … they supplied a sound system for the launch of the RRS Sir David Attenborough.

The 128.9-metre-long state-of-the-art vessel which has a 24-metre beam and a draft of 7 metres, is owned by the Natural Environment Research Council and will be operated by the British Antarctic Survey (BAS).

It replaces two existing ships and will be engaged in essential research and logistical support for the Survey.

The event at Cammell Laird saw the distinctive red hull (number 1390) launched following an impassioned speech by Sir David Attenborough himself, who focussed on the importance and centrality of the work undertaken by the BAS for the benefit and the long-term survival of our planet.

The RRS Sir David Attenborough’s impressive hull was assembled on a slipway from which it descended and hit the water. The presentation platform from which Sir David gave his speech was set up directly in front of the bow, and close to the left and right of this were two VIP grandstand seating areas

On the starboard side of the bow (stage left) was a larger public area where around 3000 people assembled to share the special moment. 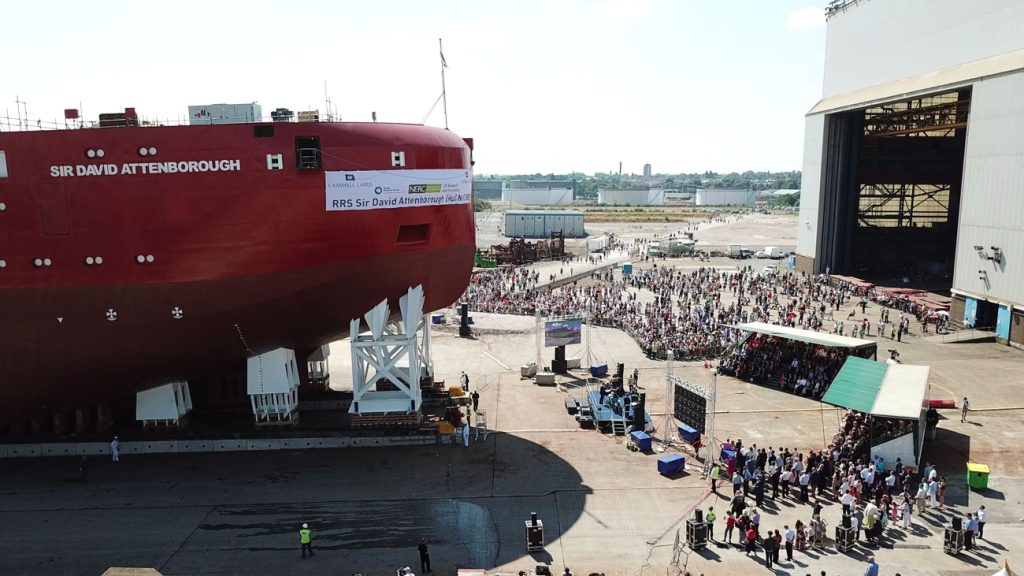 tube’s Melvyn Coote explained, “We were hugely excited to be involved! Apart from the unusual location and the sonic challenges which needed to be overcome, it was the nature and profile of the event and the real sense of purpose associated with the BAS mission together with the incredible technology that supports it!”

Audio wise, they needed to cover the two grandstands and the open public area, so Melvyn chose a d&b system for its clarity, quality and small unobtrusive footprint. This was set up in front of the stage, configured as two ground-stacked main arrays of four Y8s, plus four Y-SUBS and one B2, all driven by D80 amps.

For the larger public area, Melvyn and his crew chose to install some very tall ground stacks, with two d&b B2 elements at the bottom, two V-SUBS on top of these, and then five V8s up to the top of each array, again powered by D80s. The tops of these stacks were about 3.5 – 4 metres off the ground – they were safely ratcheted in place – to ensure they had a good throw to the back of the area. 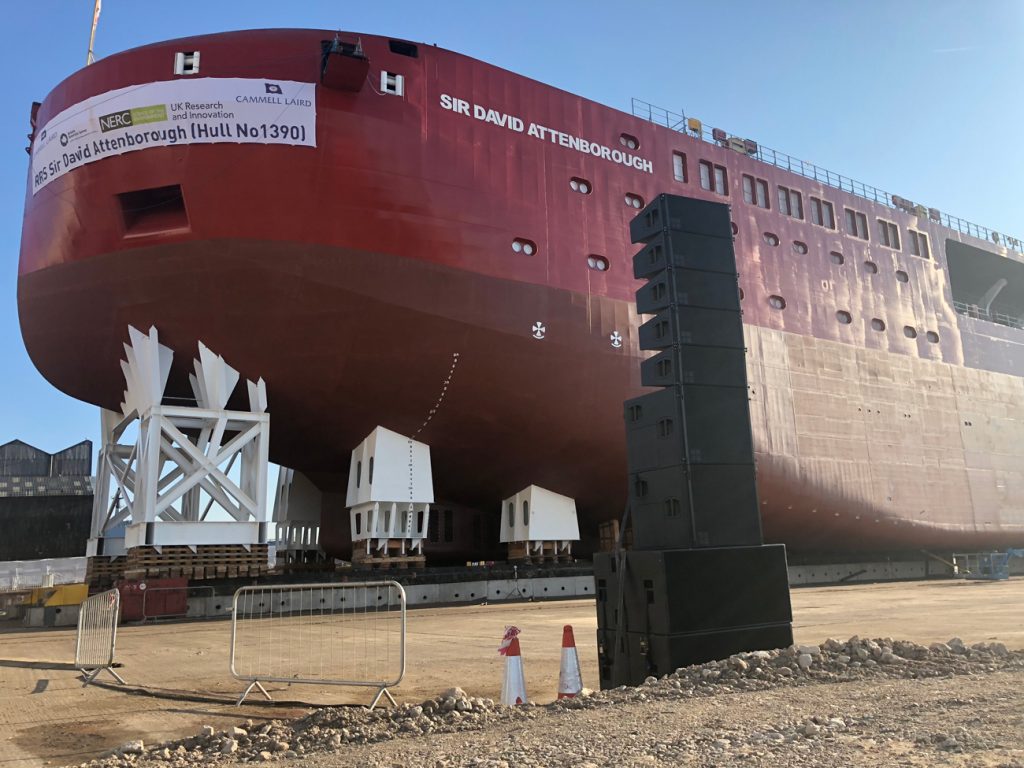 For control, tube spec’d one of their Yamaha CL5 consoles, running with a Rio3224-D rack at FOH for video inputs and another onstage for all the stage mic inputs.

LED screens were positioned in the presentation area to beam visuals, including close ups of the speeches, to the VIP grandstands and the public area.

Sources included a DPA4066 headset mic running via a Sennheiser 6000 belt pack for a speech by one of the Cammell Laird project management team, plus a selections of lectern mics for the other speakers, including Sir David.

Having provided audio for a multiplicity of different outdoor events in all types of environments and scenarios, tube recalled their extensive collective experience and working knowledge of dealing with idiosyncratic and interesting places and spaces.

They have previously also worked in different shipyards including in Hull for the launch of their 2017 UK City of Culture year, and famously, in Turku Finland for the Opening Ceremony of the city’s year as joint European Capital of Culture in 2011 … when temperatures dropped to minus 30 for the show!

The many challenges of this one also included the weather. Although with the UK enjoying as record sizzling summer … Melvyn and the team were happy to report that cold was not the issue!!!

However, the rig day was fraught with torrential rain, while the show day was sunny, hot and muggy as temperatures once again soared into the 30s!

The cables and comms runs were long, over 300 metres and the physical dimensions of the site – being a shipyard – were on a grand scale that had to be accommodated.

Also, while the other shipyards in which tube has worked on shows have not been active at the time, Camel Laird most definitely was … so they had to be alert for a myriad of dynamic shipyard vehicles on the move – including cranes, forklifts and other funky looking shipyard plant – all whizzing around the site on their daily business!

The event ran extremely smoothly and garnered worldwide media attention on all levels with over 10 million people viewing it on the British Antarctic Survey YouTube channel.

“A palpable buzz permeated everywhere which was great” said Melvyn, “We were extremely proud to ensure that everyone could clearly hear the speeches and the VT clips for this historic occasion”, and he added that they enjoyed some great teamwork with the Mills Media Creative and good camaraderie with the Cammell Laird staff.

Andrew Mills, managing director of Mills Media Creative, said “We have worked with tube on many live events and we knew that the sound production would be of the highest level.  It was a challenging environment and Tube delivered a sound system that was spot on.  Our client was very happy with the ceremony.”

The first steel for the RRS Sir David Attenborough was cut in mid-2016 and the construction of the superstructure and fitting out now continues with the hull in wet dock, and will be finished later this year, with the ship scheduled to be in full service by 2019.

The 15,000-tonne vessel will be fully equipped with the latest instrumentation technology and has superior (Polar Class 4) ice breaking capacities and a greater endurance than the existing ships.

It will have a twin-shaft hybrid diesel-electric propulsion system and a max speed of 17.5 knots in open water, with the ability to break up to 1 metre thick ice at a speed of 3 knots. Four Tees White Gill thrusters – two in the bow and two in the stern – will assist in manoeuvring and positioning.